With the release of RMEP 2012, the workflow for creating Pipe Systems has taken on two different processes. The same is true for the HVAC systems as well, but we will be focusing on the Pipe Systems. The original process took us through selecting a fixture, then Create/Edit/Add to the system. The 2012 new process lets us create by duplication of the existing Pipe Systems and renaming them to the name we want. I will refer to these two methods as: 1) Create systems through selection –and- 2) Create systems through duplication. In my examples below I will be working with the Domestic Cold Water System specifically, but the process is the same for the other Pipe Systems as well. 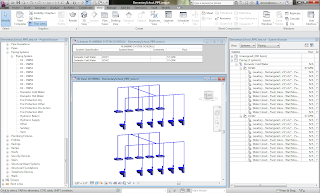 
In the section view below, I tied the two systems together via a riser where I selected a piece of pipe on the first floor, right-click to “Create Similar”, and picked midpoint to midpoint to place the riser. Notice how the two named systems are now combined into a single named system and the DCW2 system is removed from the System Browser. 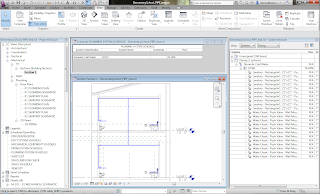 Now let’s look at the other method. In the pic below I show the Family listing of Piping Systems, where I have duplicated and renamed the Domestic Cold Water ‘outtabox’ system to create the two systems: DCW1 and DCW2. I then assigned the first floor and second floor fixtures to their respective System Types: DCW1 and DCW2. Notice too that in the System Browser, both systems are listed but not as ‘children’ of the Domestic Cold Water system as the first method shows. 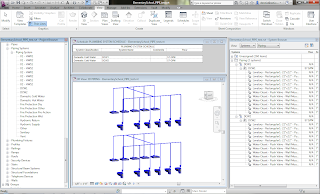 As before, I now tied the two systems together via a riser. Notice now the Flow Schedule and the System Browser both keep each system separate. 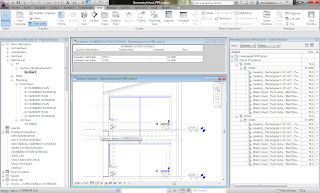 Decisions, decisions. Which way do you want to standardize on? I think it will all depend on the desired final result. Do you want to keep your systems separated for reporting purposes, or would you rather end up with a large system showing the overall reporting.

I invite all comments and observations concerning the Pipe Systems. As an instructor I do want to teach the "best" method, but it seems right now I will be teaching both ways and letting the client decide which way works best for them.