I am very visually oriented.  I like to see what I am modelling.  However, when it comes to Spaces within RMEP, you couldn't see what you are really doing. While there is a model view of Spaces within the built-in analysis interface, I still had difficulty exploring to see where I may have missed placing Spaces or where Spaces were overlapping one another. Now, working between RMEP and Navisworks, the Space model can be visualized.  Start with the settings for Revit NW Exporter and/or NW Reader:


Findings as I was exploring this feature:  You do not need to check the box “Convert room geometry” which is to convert the Spaces to construction parts.  Either way, the Spaces show up.  If using the NW Exporter from Revit, I still needed to have a 3D view as the active view when I issued the command.  If you have a Plan View up, example Level 1, then I found that my Level 1 Spaces came in flat/2D while Spaces from other floors were 3D.  You do absolutely have to Convert Entire Project.

I can see where this would help to insure all area volumes are accounted for with a Space. Look through the Space Model and find the gaps. Specifically where this helped me tremendously is in the Revit MEP Loads Analysis.  Reviewing the Spaces on the Detail tab, often you will get a warning about overlapping Space Volumes:

It can be difficult sometimes to find the overlapping.  Revit will not display the Spaces in a 3D view, which would help greatly to see and evaluate the Spaces overlapping, so using Navisworks becomes an important tool for visualization of the Spaces.
Below is a screen shot of how I setup my SearchSets and Appearance Profiler to make the Spaces easier to evaluate.

From here, I first tried to run a Clash Detective batch to find the overlapping Spaces, but discovered that the Spaces did not Clash with one another.  I even used the move to tool and move one Space clearly into another Space and then Clashed those two Spaces specifically, but still did not get a Result. I tried both normal Hard clash, and the new Hard(Conservative) clash (See some further notes on this below).


Then I discovered a magic setting, in the Rules tab, I clear the check mark for "Items in same group/block/cell".  Very odd, but nonetheless, I got a clash result.  Digging a little deeper, I found in Options/Model/Performance/On Load Collapse on Convert to be set to None.  Once I set this value, I was able to check the "Items in same group/block/cell" and still get clash.

Now to analyze the Spaces' overlapping.  As I rotate around, I can see the problem easily:
Head back into Revit MEP, put in a Space Separator, and my overlapping problem is gone.  If you haven't tried the SwitchBack function in Navisworks, now would be a good time to try it.  Note: you first have to have Revit open and Switchback turned-on: 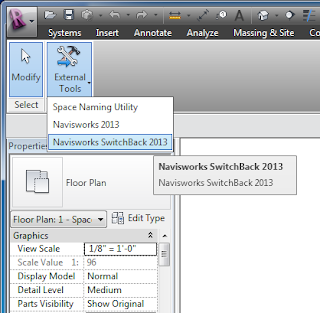 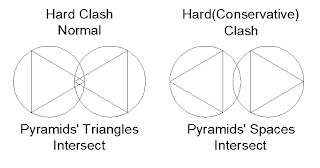 A little animation I made of my Spaces within Navisworks.