I'd love nothing better than to see your company FAIL......earlier in the design process.

I must admit that I borrowed part of this post's title from the April issue of Product Design and Development, but the title made perfect sense to me, especially in light of the numerous issues that Boeing is having with the Dreamliner 787.

Specifically, the Dreamliner's lithium-ion batteries had been shown in rare circumstances to catch fire. Though I'm sure a degree of thermal testing was probably done prior to manufacturing of the batteries, the recent problems encountered by Boeing point out the importance of virtual testing, and doing so earlier in the design process. The FAA has just recently lifted a 3 month ban on Dreamliner flights, and Boeing has stationed 300 workers on 10 teams around the world to do the work of replacing the defective units with a revamped battery system that's better insulated against a short circuit.

So let's do some math here - it's said that it will take about five days to install the revamped lithium-ion battery system on each plane, so 5 days of rework with 300 workers salaries at double the minimum wage would be close to $180k. But that PALES in comparison to other stats, such as Quantas Airlines' scrubbed purchase of a single Dreamliner (they're estimated to be $207 million SRP), and Japan's largest airline's cancellation of 3,600 Dreamliner flights.

Here's another costly example of "failing late" - Microsoft's XBOX 360. There have been over 60 million sold since 2005, and it continues to be a big seller. However, early customer surveys indicated that over 42% of the consoles had to be repaired or replaced by Microsoft due to some level of failure.


Early XBOX systems often encountered conditions that caused them to overheat, thus the Red Ring of Death. Microsoft took a second look at the problem, extended their warranty coverage from 1-3 years, and after a class action lawsuit in 2007 and almost $1 billion, they've managed to reduce the failure rates and remain a viable player in the home video game industry. However, most companies couldn't afford a billion dollar mistake.

A common line I hear from companies when I ask them about product testing is either "oh, we have some calculations we use, and they almost always fit the need", or, "we just overbuild to make sure it can take whatever our customers throw at it". 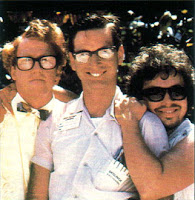 The good news is that we've reached a point where technology can enable even the smallest of companies to perform virtual drop tests, wind tunnel analysis, and thermal fluid flow simulation. And the technology doesn't require guys like these (>>>) to run it.......

Autodesk recently released a set of tools that refute the
traditional perception of difficult to use, expensive (and hardware intensive) software simulation programs that only a NASA scientist with a very powerful computer could even attempt to work with.

Autodesk Simulation 360 is game changing software, lowering the 3 barriers to traditional simulation that prevent companies from earlier incorporation in the design process - cost, hardware and knowledge.

Simulation 360 combines the power of Autodesk's Mechanical Simulation and CFD products in a cloud based, easy to use interface where the user inputs geometry, materials and desired conditions to predict product performance EARLIER in the design process. And it's CAD neutral, so you can load Inventor, Pro-E, Solidworks, CATIA or other 3D model content for simulations.

As a service based model, Simulation 360 can be used when you need it at a far lower cost than purchasing perpetual licenses.You simply log into the Simulation 360 service, upload your models, materials and conditions for testing, then utilize the Autodesk cloud servers to act as the solver. And with infinite cloud computing power, you can generate multiple scenarios for testing, load them, and continue working on your designs while Autodesk's cloud servers do the number crunching.

So to summarize, the key is to fail FASTER in the design process. Equip your engineers with these low cost simulation tools to validate and test multiple iterations of a design before manufacturing, and you'll reduce physical prototypes, increase innovation, profitability and customer satisfaction. And who knows? You may even prevent a billion dollar mistake.
Posted by Trevor Fite at 10:27 AM